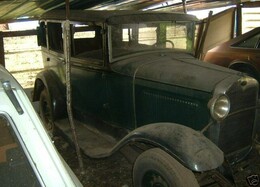 Assembled around April 1930 in

Start of Restoration in 2006

Here you will find the latest additions to this website.

The links below guides you to the respective sites were the addition is described. Some contents will show up in the respective area of the part and in the overall assembly site.

Since May we have traveleld about 2900 km with very few problems and 5 oil changes. . From now on I I try to give from time to time some information about the performance of the car and things that happen and need  attention.

So far everything has been working fine, only the following items needed to be replaced: Condensor and flasher, both new parts.

One thing concerns me: The engine has developed a quite impressive oil leak. I have nor jet investigated enough, it could be the rear main or more probable the end of the camshaft. It is not blow by, overfill  or a blocked oil brather pipe. I installed an oil janitor, so it is not a problem, but a nuisance. I will see if I can spare some time during the winter to remove the oil pan and have a more closer look.

The car is finally finished had has passed the governmental check for roadworthyness (TÜV) without problems. See pictures in major milestonses.

Windshield and wiper installed. For just the wiper see here.

The interior is begun. All pictures regarding the assembly of the interior (upholstery, dash panel, window frames and mouldings, headliner,  floorpans and carpet you will find in the section "interior".

So far the headliner and cord, windlace, panels, floor pans and cowls panels, carpets, rear and quarter windows and window shades, the respective garnish mouldings and window frames and the rear seat are in the car. Starts to look nice.

Entire fuel system is installed in the car.

Running board trim, mat and rear fenders and apron.

The body is on the chassis! See also major milestones.

Final assembly has begun. We added a new chapter "Assembly" were from now on all the pitures will shown.

Front and back seat upholstery finished.

Final Preparation for painting are finished.

Preparation for painting has been started: Filling.

The car is running, respectively the chassis. We drove around! I think you could call it a "Running Chassis"

May 19th 2014: Hi Chester, you asked a question about the pictures of the wood. I can not reply to your email adress, it says connection refused. Please try again, may be with another email?

Due to the assumed accident the right panels above the doors had to be pronlonged for about 0,5 cms.

All wood is finished, sheet metal nailed and riveted to wooden skeleton and body finally adjusted and removed from the frame.

Hood: Disappointing realisation: The original hood has to be replaced.

Body Aligment (Hood Alignment and assembly and fitting of passenger side doors) startet.

Sunvisor and panel above windshield attached to the body.

The fitting of the body (cowl, wood, sheet metal) is quite tricky due to the deformation of mainly the cowl section due to an accident sometimes in the past of our car.

Engine is back from the machine shop, painted and ready for assembly.

As suggested on fordbarn.com we replaced the welded steering arms with good used originals. Safety first!

Carburator and accelerator assembly andsediment bulb have been disassembled.

Oil pump is reassembled and ready.

Water pump housing has been sandblasted and turned out to be cracked.

Bumbers are back from plating.

Inside door handles, window handles and seat adjust knob are back from plating.

All electrical parts are restored, wiring and coils available as reproductions and ready for assembly! In Detail:

In This chapter we try to dicribe the "interesting" process of fitting and aligning the wood, doors, cowl etc.

Starter is finished and in working order!

Horn Rod finished, as ist is part of the steering column you will find it there.

Rear brakes including hubs and drums are finished and assembled.

All  Brake and hubs parts finished, some brake parts preassembled.

All shock absorber parts are ready for assembly.

All remaining sections of "Restoration" online.

Website is online! (Not all pictures have been uploaded jet)